And rightly so. For decades, violent militia groups used the sale of conflict diamonds, or “blood diamonds,” to fund anti-government movements. These groups also committed human rights abuses, often exploiting miners and their families. Blood Diamond shined a spotlight on these issues, and conflict diamonds received a flood of global attention.

What received less attention, however, were subsequent efforts by the United Nations, government organizations, nonprofits and the diamond industry to halt the mining and sale of conflict diamonds.

In the last decade, blood diamonds have been virtually eliminated from the global marketplace. Stricter regulation, as well as a renewed commitment from diamond manufacturers and retailers to work only with ethical suppliers, has transformed the global diamond industry for the better.

The most sweeping measure taken against the production and sale of conflict diamonds, the Kimberly Process is a binding agreement that places a series of regulatory requirements on countries wishing to participate in the global diamond trade.

With 81 member countries, the Kimberly Process has drastically reduced the prevalence of conflict diamonds: Today, 99.8% of retail diamonds come from conflict-free zones. Participating countries must:

With these statutes in place, it becomes very challenging for disreputable operations to sell conflict diamonds outside of conflict zones.

Organizations like the Diamond Development Initiative work in tandem with the Kimberly Process to encourage countries to adopt development and human rights benchmarks alongside existing regulations. Altogether, these efforts are creating a healthier diamond industry and safer mining communities.

The most straightforward reason for the stark drop in conflict diamonds? Diamonds are increasingly difficult to find, and guerilla groups rarely have the resources to mine them.

Since the diamond industry exhausted its supply of easy-to-reach surface diamonds, even the largest companies have a hard time gaining access to the gems. Diamond behemoth DeBeers spent $1 billion to secure a mining spot in Canada, and the company has halted any search for additional mines due to sparse supply and soaring costs.

For example, out of the 7,000 areas DeBeers scanned for diamonds worldwide, a mere one percent contained enough stones to justify mining. That number will continue to drop in coming years. As a result, diamonds producers today spend only half of what they did in 2007 on diamond-hunting projects, and some have stopped entirely.

With exploration and infrastructure costs deterring even the most established producers, the diamond trade’s barriers to entry are too high for most warmongers to hurdle. 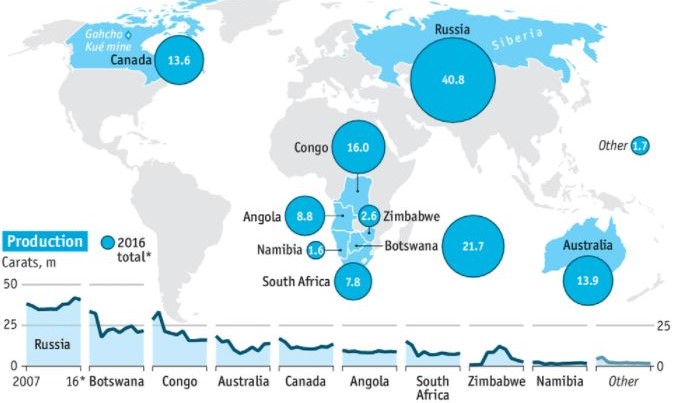 Another contributor to the near-disappearance of conflict diamonds is the expansion of diamond mining operations outside of Africa.

In 2017, Russia, Canada and Australia all landed in the top four world producers of diamonds by carat. In fact, Russia surpassed the top African producer, Botswana, by 20,000 carats, and Canada was home to two of three large mines opened worldwide.

As global supply wanes, the Arctic regions of Russia and Canada will serve as the final frontier for diamond producers while Africa’s diamond output declines.

While regulatory measures like the Kimberly Process were set up as early as 2000, the last ten years have brought huge steps toward eradicating conflict diamonds from the global market. Increased oversight and a greater focus on peripheral development goals have contributed to better conditions for miners and peace of mind for consumers.

In addition to these concerted efforts, the deep pockets and technical expertise required to mine diamonds have prevented many unequipped rebel groups from participating in the diamond trade. Furthermore, as diamond production shifts away from conflict zones, it becomes easier to assure that each stone is ethically sourced.

Going forward, consumers, industry players and governments must work together to demand ethical sourcing and provide accountability. The story didn’t end with Blood Diamond, and the worldwide diamond industry will continue to build on its progress.

At Gage Diamonds, we source our diamonds from De Beers site holders, whom in turn source their diamonds from only a handful of the largest diamond miners in the world. By only sourcing our diamonds from the most reputable site holders, we believe that we can greatly limit the possibility of supplying a diamond that was mined under unethical conditions in conflict zones. By purchasing a real diamond, you are funding an industry that supports millions of individuals in non-conflict zones that rely on the diamond mining industry as their main source of income.